This striking E Type from the last year of production is finished in Azure Blue with Tan leather and has new Chrome wire wheels with white band tyres. Optional head rests fitted. Over the years this very car has appeared in two classic car auctions with the relevant catalogues present in the history file. In 2007 an Irish buyer purchased the car from one of the UK’s foremost E type dealers. The car remained unused in storage until being recommissioned at a cost of almost €6000 and being sold in 2014 to UK private resident. Comes with original handbook, aforementioned auction catalogues and receipts for the recent work carried out. Presented in superb condition this striking car is ready to be enjoyed and treasured by its new owner.
In 1994 the classic auction catalogue description included the following:
“…. in exceptionally original order, having being passed from father to daughter some 10 years ago. Whilst in the father’s possession the car was maintained by Jaguar main agents Harwoods of Pulborough and since then has been looked after consistently by Flint Garages in Barnham Sussex. It has covered less than 47,000 miles from new….”
In 2006 the car again sold under the hammer; extract from the catalogue states:
“….described by the vendor to be in good condition all round with the body and paint work in particularly good order. The interior is finished in tan leather with original seats and new roof trim and visors, again all in good order. This automatic example has only covered 57,640 from new and has covered 12,840 miles in the last 12 years. The previous owners had kept the car in the same family for the past 14 years before the current vendor (a long standing Jaguar Enthusiasts Club member) purchased the car in 1994. Upon purchase the car received basic restorative work carried out by SRG Engineering and Cambridge Motorsport with extensive work being carried out by specialist Gilbert Grace &Son between 1996 and 2000. Completing the restoration was a bare metal re-spray in 2000, carried out by JJ Body repairs of Buckley. Over the years in excess of £20,000 has been spent on the vehicle….” 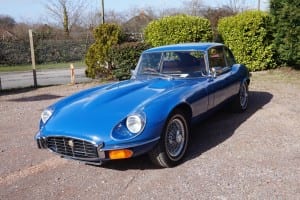